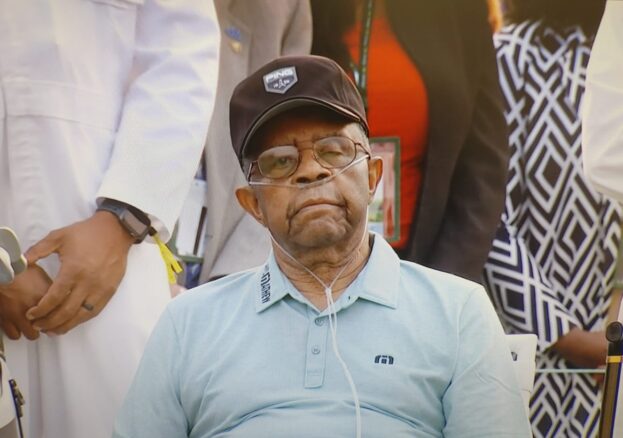 Robert Lee Elder is a retired American professional golfer. In 1975, he became the first African American to play in the Masters Tournament, where he missed the cut. Elder was invited to the tournament after he won the 1974 Monsanto Open.

Augusta National Golf Club and Masters Tournament Chairman Fred Riley began the ceremonies by saying, “Lee Elder was the first Black man to compete in the Masters, and in doing so, he blazed a trail that inspired the game of golf and future generations of players,” Ridley said.

“We are delighted today to have a number of Black golfers who are proud members of the PGA of America. They were undoubtedly inspired by Lee Elder and his message that the game of golf belongs to everyone.

“Today, Lee Elder will inspire us and make history once more,” Ridley continued. “Not with a drive but with his presence, strength and character. Lee, it is my privilege to say, ‘You have the honors.’”

Once those words were uttered, Elder rose from his chair and held his driver in the air, nodding in appreciation and smiling at the warm, embracing reception.

Elder’s family confirmed that a decision was made last week that he would not hit the tee shot. Elder, who contracted the COVID-19 virus, had been forced to use an oxygen machine since his hospitalization, the family stated. His health was such that he was unable to hit a ceremonial tee shot. But that made no difference to the men and women gathered around the first tee.

Black Golfers Association said that this is History!

The Black Golfers Association with over 26k followers said that this is history! Finally giving Mr. Lee Elder his flowers. The first black man to ever play at the Masters Tournament. #golfbelongstoeveryone

For months, Lee Elder had envisioned hitting a drive off the first tee box at Augusta National Golf Club.

In the end, it did not matter, as Elder owned the tee box – receiving a minute-long ovation from hundreds of patrons that included former Masters champions Phil Mickelson, Nick Faldo, Bubba Watson, and Charles Coody. Also, in attendance was Cameron Champ, the only African American in the field this year.

Up on the balcony of the Clubhouse stood a dozen or so white-jacketed members of the Augusta National waitstaff. A similar scene took place when Elder teed off in his first Masters all those years ago, when Club employees came out to witness the historic moment.

Then, the three golf greats made their way to the Press Building for the traditional interview that follows the Honorary Starters Ceremony.

“Well, I certainly want to say thank you very much for this great opportunity,” Elder said. “It was one of the most emotional experiences of my life and something that I will cherish for the rest of my life.”

The African Caribbean Golf Association in the UK (ACGA) would have been immensely proud that the Masters were honoring Elder this week too.

The ACGA came about back in 1992, with four black friends – including Franklyn and Tony Johnson – playing four-ball at a Middlesex golf club.

“It was the funniest thing ever,” says Tony of the hush that descended as they stood at the first tee by the clubhouse.

“You could see five or six people at the windows, trying to work out if we could actually hit this ball or not. And we all hit shots that we would probably never replicate ever again! They went straight down the middle. We walked past and gave a wave to the twitching curtains.”

The ACGA’s membership has waxed and waned from a peak of 90 since it was officially founded in 1992, and at one time they counted eight professionals among them. They have played other golf societies all over the UK and Ireland, touring some of the finest courses.

Six years ago, the ACGA’s then-captain, Jacqui Harbour, decided to make Prostate Cancer UK their charity of the year. The decision lifted the lid on a disease that turned out to have affected many of their members.

The association continues to hand out our prostate information to all their members and has come up with some great ways to raise money for us as they play.

It was a great week for golfer to stand up and to salute Lee Elder, and golf really does belong to everyone!

For Black History Month, Dance Informa reflects on black dancers who have significantly impacted the art form. In this article, we look at dancers who have already passed away, but left a living   Since the country’s bicentennial in 1976, Black History Month has been an official designation to honour and remember the significant and immeasurable impact African Americans have had on the nation. President Gerald Ford said the annual […] 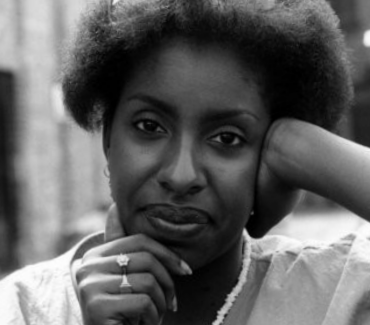 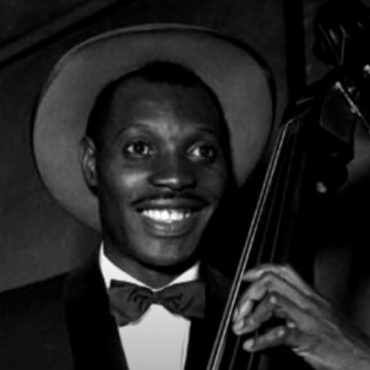