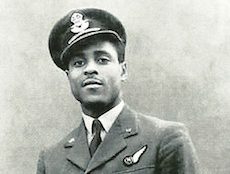 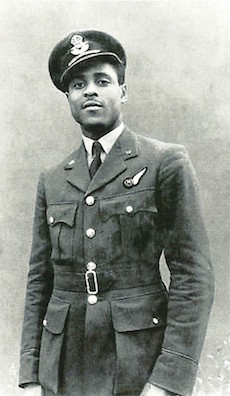 Jurist and Royal Air Force (RAF) Flight Lieutenant John “Johnny” Henry Smythe was born on June 30, 1915, in the West African port city of Freetown, Sierra Leone. He received a grammar school education and had worked as a civil servant before joining the Sierra Leone Defence Corps (part of the British Colonial Army) in 1939, achieving the rank of Sergeant.

Prior to the onset of World II Smythe read Adolf Hitler’s Mein Kampf and believed a horrible scenario of enslavement and extermination awaited peoples of African ancestry should the Nazis prevail. With the backing of the colonial administration he volunteered for service in the RAF. Of a group of 90 he was one of four men to finish basic training to become a navigator, and after a year of additional training was attached to a bomber squadron.

On 18 November 1942, on his twenty-eighth mission over Europe, his bomber was shot down and he was wounded in the groin and abdomen. Enemy troops found him hiding in a barn. Smythe later recalled: “The Germans couldn’t believe their eyes. I’m sure that’s what saved me from being shot immediately. To see a black man — an officer at that — was more than they could come to terms with. They just stood there gazing.”

While spending the duration of the war at Stalag Luft I in northern Germany he served on the escape committee to free white POWs. “I don’t think a six-foot-five black man would’ve got very far in Pomerania, somehow,” he said. Liberated by Russian soldiers in 1945 (they embraced him and gave him vodka), he received a hero’s welcome when he returned to Freetown. In the post-war 1940s he worked as a military liaison officer in the Colonial Office; accompanied West Indian former military personnel and others to work in Britain; studied at the Inns of Court School of Law; and served in the RAF Reserve.

In 1951, Smythe became a practicing barrister, married his Grenadian fiancée, Violet Wells Bain in London, and then moved back to Freetown. In 1953 he represented the Sierra Leone Naval Volunteer Force at the coronation of Queen Elizabeth II. Having been a Queen’s counsel for several years, in 1961 he was appointed Solicitor General of the newly independent nation of the Republic of Sierra Leone. He lectured in the eastern United States in 1963 and was awarded the Order of the British Empire (OBE) in 1978. Retired from public service in Sierra Leone, in 1993 he moved with his family to Britain.  John Smythe died in Thame, Oxfordshire on 9 July 1996 and was buried in St. Mary’s Church Cemetery. He was survived by his wife and five children.

Smythe’s military record is a reminder of the contributions made by Britain’s black colonials in winning two world wars while serving in the RAF.  Those contributions start with the Jamaican William Robinson Clark who in 1917 was severely wounded and narrowly escaped death when his R.E.8 biplane was attacked by German fighter planes.  It continued into World War II when in 1944 Trinidadian Spitfire pilots James Hyde was shot down over Germany and Collin A. Joseph was killed by friendly fire.  Fighter pilot Arthur O. Weekes from Barbados and Spitfire pilot Vincent Bunting from Jamaica were each credited with shooting down Luftwaffe FW-190 fighters in aerial combat near Lübeck, Germany in 1945. 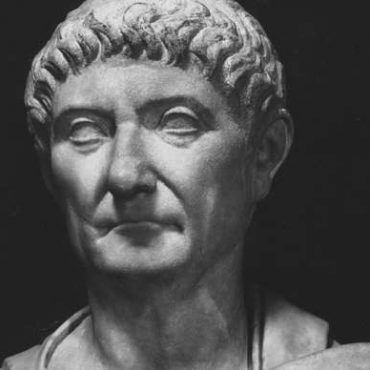 17 November 284 - Diocletian Roman Emperor   Diocletian, Latin in full Gaius Aurelius Valerius Diocletianus, original name Diocles, (born 245 CE, Salonae?, Dalmatia [now Solin, Croatia]—died 316, Salonae), Roman emperor (284–305 CE) who restored efficient government to the empire after the near anarchy of the 3rd century. His reorganization of the fiscal, administrative, and military machinery of the empire laid the foundation for the Byzantine Empire in the East and temporarily shored up the decaying empire in the West. The last major […]