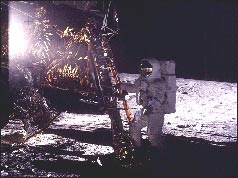 The crew of the latest Apollo mission has carried out the second manned landing on the Moon’s surface.

Apollo 12 almost failed before it began because of a leaking hydrogen tank, but launch crews raced against time to change it before takeoff.

There was another moment of drama shortly after launch as Apollo 12 was struck by lightning.

Instruments shut down for a few seconds, but power was quickly restored.

Since then, the mission has run smoothly apart from the early failure of the television camera which was to have sent the first live colour pictures back to Earth.

The astronauts, Commander Charles “Pete” Conrad and Lieutenant-Commander Alan Bean, made a perfect landing on smooth ground between craters in the Ocean of Storms at 0653BST (0553 GMT), four days after takeoff.

Pete Conrad was first to step out of the lunar module, codenamed Intrepid, becoming the third man to walk on the Moon’s surface at 1244 BST (1144 GMT).

The ladder used to climb down onto the surface was slightly short, and forced him to jump the last few feet.

As he did so, he joked, “Man, that may have been a small one for Neil, but that’s a long one for me!”

He found the surface soil was softer than at Tranquillity Base, where the first manned mission, Apollo 11, landed in July.

It is believed Intrepid had landed on a ray of debris thrown out by the crater Copernicus, 150 miles (240 km) away. The astronaut’s boots sank noticeably into the soil.

The camera failed 15 minutes after Commander Conrad left the module. Engineers are trying to find out what caused the fault, and believe it may have been caused by the intense light of the sun.

One of the objectives of the mission was to recover Surveyor 3, a previous American probe sent to the Moon in April 1967.

When Intrepid landed, it was within sight of the probe, 600 feet (200 metres) away and perched on the edge of a small crater.

The two astronauts will attempt to retrieve the probe during a second moonwalk tomorrow.

During their three-and-a-half hour walk on the surface, Pete Conrad and Alan Bean were in high spirits, whistling, laughing and joking.

They carried out experiments, collected samples, and left a lunar surface experiment package with a number of devices to measure phenomena like solar winds and atmosphere.

Throughout the two men’s stay on the moon, their colleague, Richard Gordon, has remained orbiting the Moon in the command module, Yankee Clipper.

It emerged that the failure of the television camera was caused by Alan Bean, who had accidentally pointed it directly at the Sun, frying the optics.

The two astronauts spent a total of seven-and-a-half hours on the lunar surface during their two trips outside the Intrepid.

They successfully retrieved parts of the Surveyor lander and returned it to Earth.

The next mission, Apollo 13, took off on 11 April 1970 and was to have carried out the third Moon landing.

It nearly ended in tragedy when there was an explosion on board. All the astronauts returned safely, but without carrying out their mission.

Afterwards, American investment in the space programme began to decline.

A further eight astronauts travelled to the moon in five more missions with the final manned lunar landing, Apollo 17, completed in December 1972.

Then in January 2004, US President George Bush announced American astronauts would return to the Moon by 2020 as the launching point for missions further into space.

The commander of Apollo 12, Pete Conrad, was killed in a motorcycle crash in 1999. 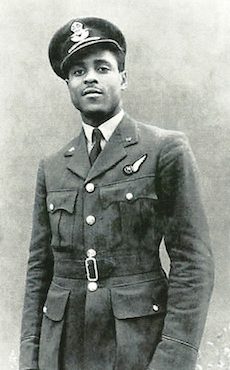 John Henry Smythe (1915-1996) Jurist and Royal Air Force (RAF) Flight Lieutenant John “Johnny” Henry Smythe was born on June 30, 1915, in the West African port city of Freetown, Sierra Leone. He received a grammar school education and had worked as a civil servant before joining the Sierra Leone Defence Corps (part of the British Colonial Army) in 1939, achieving the rank of Sergeant.   Prior to the onset […]