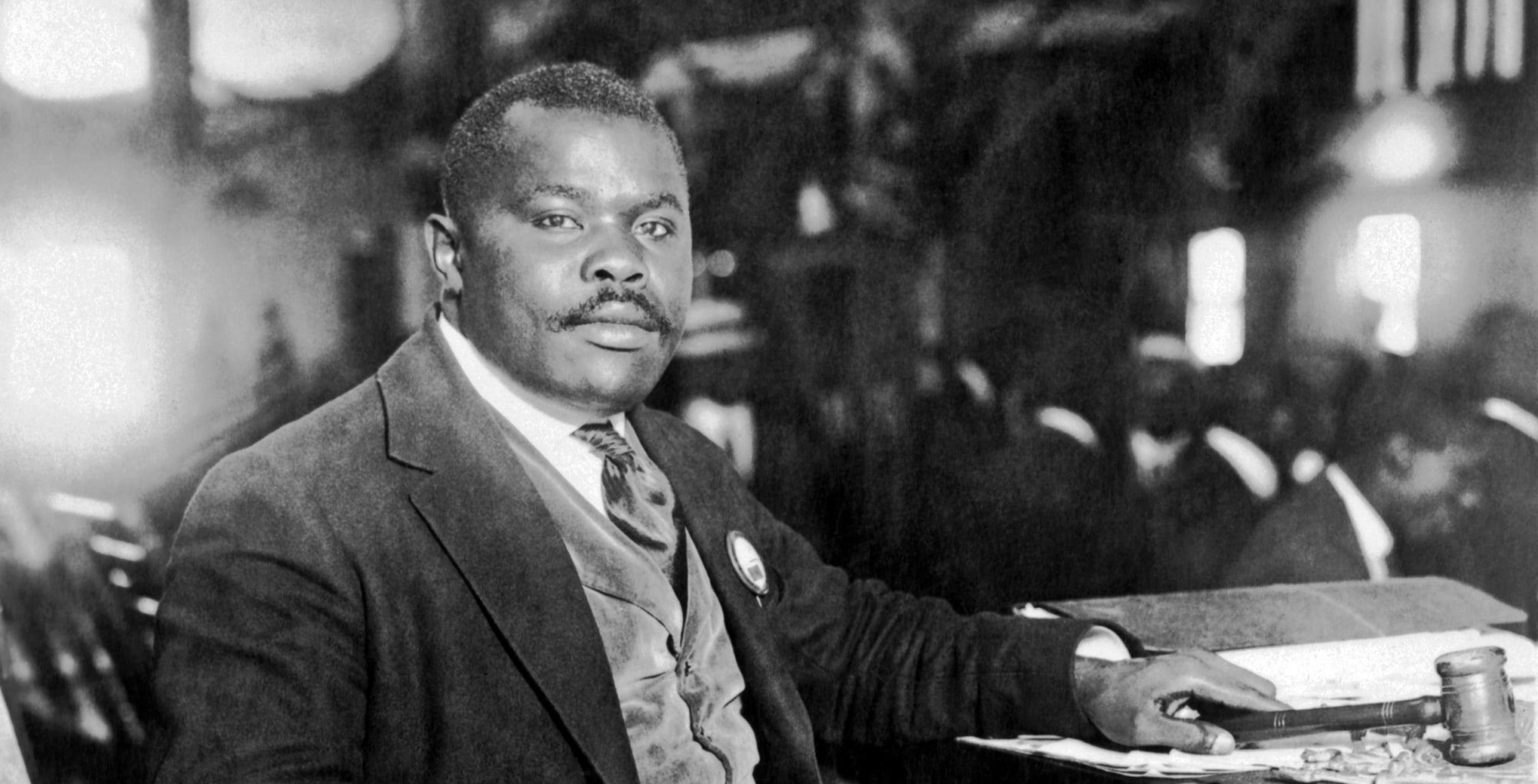 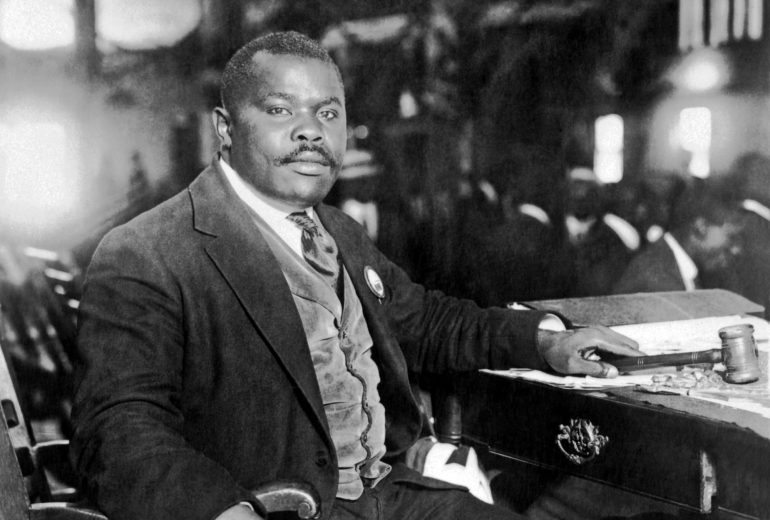 In this speech given in New York City on 25 November 1922, Marcus Garvey explains the objectives of the Universal Negro Improvement Association, the organization he believed would lead the worldwide movement toward black liberation.

Over five years ago the Universal Negro Improvement Association placed itself before the world as the movement through which the new and rising Negro would give expression of his feelings. This Association adopts an attitude not of hostility to other races and peoples of the world, but an attitude of self respect, of manhood rights on behalf of 400,000,000 Negroes of the world.

We represent peace, harmony, love, human sympathy, human rights and human justice, and that is why we fight so much. Wheresoever human rights are denied to any group, wheresoever justice is denied to any group, there the U. N. I. A. finds a cause. And at this time among all the peoples of the world, the group that suffers most from injustice, the group that is denied most of those rights that belong to all humanity, is the black group of 400,000,000. Because of that injustice, because of that denial of our rights, we go forth under the leadership of the One who is always on the side of right to fight the common cause of humanity; to fight as we fought in the Revolutionary War, as we fought in the Civil War, as we fought in the Spanish American War, and as we fought in the war between 1914 and 1918 on the battle plains of France and of Flanders. As we fought on the heights of Mesopotamia; even so under the leadership of the U. N. I. A., we are marshaling the 400,000,000 Negroes of the world to fight for the emancipation of the race and of the redemption of the country of our fathers.

We represent a new line of thought among Negroes. Whether you call it advanced thought or reactionary thought, I do not care. If it is reactionary for people to seek independence in government, then we are reactionary. If it is advanced thought for people to seek liberty and freedom, then we represent the advanced school of thought among the Negroes of this country. We of the U. N. I. A. believe that what is good for the other folks is good for us. If government is something that is worth while; if government is something that is appreciable and helpful and protective to others, then we also want to experiment in government. We do not mean a government that will make us citizens without rights or subjects with no consideration. We mean a kind of government that will place [our] race in control, even as other races are in control of their own governments.

That does not suggest anything that is unreasonable. It was unreasonable for George Washington, the great hero and father of the country, to have fought for the freedom of America giving to this great republic and this great democracy; it was not unreasonable for the Liberals of France to have fought against the anarchy to give to the world French Democracy and French Republicanism; it was no unrighteous cause that led Tolstoi to sound the call of liberty in Russia, which has ended in giving to the world the social democracy of Russia, an experiment that will probably prove to be a boon and a blessing to mankind. If it was to an unrighteous cause that led Washington to fight for the impendence of this country, and led the Liberals of France to establish the Republic, it is therefore not an unrighteous cause for the U. N. I. A. to lead 400,000,000 Negroes all over the world to fight the liberation of our country.

Therefore the U. N. I. A. is not advocating the cause of church building, because we have sufficiently large number of churches among us to minister to the spiritual needs of the people, and we not going to compete with those who are engaged in so splendid a work; we are not engaged in building any new social institutions, and Y. M. C. A. or Y. W. C. A.[,] because there are enough social workers engaged in those praise worthy efforts. We are not engaged in politics because we have enough local politicians, Democrats, Socialists, Soviets, etc., and the political situation is well taken care of. We are not engaged in domestic politics, in church building, or in social uplift work, but we are engaged in nation building ….

The difference between the Universal Negro Improvement Association and the other movements of this country, and probably the world, is that the Universal Negro Improvement Association seeks independence of government, while the other organizations seek to make the Negro a secondary part of existing governments. We differ from the organizations in America because they seek to subordinate the Negro as a secondary consideration in a great civilization, knowing that in America the Negro will never reach his highest ambition, knowing that the Negro in America will never get his constitutional rights. All those organizations which are fostering the improvement of Negroes in the British Empire know that the Negro in the British Empire will never reach the height of his constitutional rights.

What do I mean by constitutional rights in America? If the black man is to reach the height of his ambition in this country if the black man is to get all of his constitutional rights in America then the black man should have the same chance in the nation as any other man to become president of the nation, or a street cleaner in New York. If black man in the British Empire is to have all his constitutional rights it means that the Negro in the British Empire should have at least the same right to become premier of Great Britain as he has to become street cleaner in the city of London. Are they prepared to give us such political equality? You and I can live in the United States of America for 100 more years, and our generations may live for 200 years or for 5000 more years, and so long as there is a black and white population, when the majority is on the side of white race, you and I will never get political justice or get political equality in this country. Then why should a black man with rising ambition, after preparing himself in every possible way to give expression to that highest ambition, allow himself to be kept down by racial prejudice within a country? If I am as educated as the next man, if I am as prepared as the next man, if I have passed through the best schools and colleges and universities as the other fellow, why should I not have a fair chance to compete with the other fellow for the biggest position in the nation? I have feelings, I have blood, I have senses like the other fellow; I have ambition, I have hope. Why should he, because of some racial prejudice, keep me down and why should I concede to him the right to rise above me and to establish himself as my permanent master? That is where the U. N. I. A. differs from other organizations. I refuse to stultify my ambition, and every true Negro refuses to stultify his ambition to suit any one, and therefore the U. N. I. A. decides if America is not big enough for two presidents, if England is not big enough for two kings, then we are not going to quarrel over the matter; we will leave one president in America, we will leave one King in England, we will leave one president in France and we will have one president in Africa. Hence, the Universal Negro Improvement Association does not seek to interfere with the social and political systems of France, but by the arrangement of things today the U. N. I. A. refuses to recognize any political or social system in Africa except that which we are about to establish for ourselves.

We are not preaching a propaganda of hate against anybody.  We love the white man; we love all humanity, because we feel that we cannot live without the other. The white man is as necessary to the existence of the Negro as the Negro is as necessary to his existence.  There is a common relationship that we cannot escape. Africa has certain things that Europe wants, and Europe has certain things that Africa wants, and if a fair and square deal must bring white and black with each other, it is impossible for us to escape it. Africa has oil, diamonds, copper, gold, and rubber and all the minerals that Europe wants, and there must be some kind of relationship between Africa and Europe for a fair exchange, so we cannot afford to hate anybody

The question often asked is what does it require to redeem a race and free a country? If it takes man power, if it takes scientific intelligence, if it takes education of any kind, or if it takes blood, then the 400,000,000 Negroes of the world have it.

If we have been liberal minded enough to give our life’s blood in France, in Mesopotamia and elsewhere, fighting for the white man, whom we have always assisted, surely we have not forgotten to fight for ourselves, and when the time comes that the world will again give Africa an opportunity for freedom, surely 400,000,000 black men will march out on the battle plains of Africa, under the colors of the red, the black, and the green [Editor’s note: The flag of the U.N.I.A.]

We shall march out, not forgetting the blessings of America. We shall march out, not forgetting the blessings of civilization. We shall march out with a history of peace before and behind us, and surely that history shall be our breastplate, for how can man fight better than knowing that the cause for which he fights is righteous? How can man fight more gloriously than by knowing that behind him is a history of slavery, a history of bloody carnage and massacre inflicted upon a race because of its inability to protect itself and fight? Shall we not fight for the glorious opportunity of protecting and forever more establishing ourselves as a mighty race and nation, never more to be disrespected by men[?] Glorious shall be the battle when the time comes to fight for our people and our race. 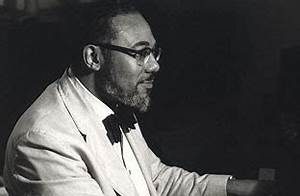 Hale Smith - Composer  - 24 November 2009 died.   Hale Smith was one of the first African American composers to abandon black folk music and, in the 1950s, become a mainstream modernist. As an accomplished jazz pianist and arranger, though, he insinuated elements of progressive jazz into his predominantly serial music in a fusion that always seemed entirely natural.   Smith's early exposure to music revolved around the classics, through […]