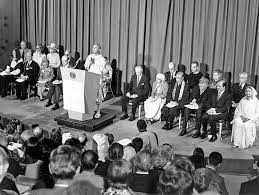 The first General Assembly of the United Nations, comprising 51 nations, convenes at Westminster Central Hall in London, England. One week later, the U.N. Security Council met for the first time and established its rules of procedure. Then, on January 24, the General Assembly adopted its first resolution, a measure calling for the peaceful uses of atomic energy and the elimination of atomic and other weapons of mass destruction.

In 1944, at the Dumbarton Oaks conference in Washington, D.C., the groundwork was laid by Allied delegates for an international postwar organization to maintain peace and security in the postwar world. The organization was to possess considerably more authority over its members than the defunct League of Nations, which had failed in its attempts to prevent the outbreak of World War II.

In April 1945, with celebrations of victory in Europe about to commence, delegates from 51 nations convened in San Francisco to draft the United Nations Charter. On June 26, the document was signed by the delegates, and on 24 October it was formally ratified by the five permanent members of the Security Council and a majority of other signatories.

Apple launches iTunes, revolutionising how people consume music On 9 January 2001, Apple launches iTunes, a media player that revolutionized the way people consumed digital media.   Bill Kincaid and Jeff Robbin, two former Apple employees, developed an MP3 player called SoundJam MP in the late 1990s. In 2000, Apple re-hired them and their partner, Dave Heller, to work on a similar player that would come standard with Apple computers. The first version of iTunes debuted early the next year, […] 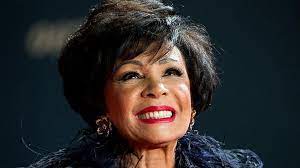