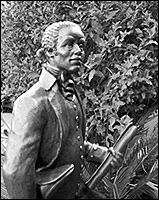 Benjamin Banneker died quietly on 25 October 1806, lying in a field looking at the stars through his telescope.

Benjamin Banneker was born in 1731 just outside of Baltimore, Maryland, the son of a slave. His grandfather had been a member of a royal family in Africa and was wise in agricultural endeavors.His father, Robert, was an African slave who purchased his freedom and his mother, Mary, was the daughter of a freed African slave and an English woman. As a young man, he was allowed to enroll in a school run by Quakers and excelled in his studies, particularly in mathematics. Soon, he had progressed beyond the capabilities of his teacher and would often make up his own math problems in order to solve them.

One day his family was introduced to a man named Josef Levi who owned a watch. Young Benjamin was so fascinated by the object that Mr. Levi gave it to him to keep, explaining how it worked. Over the course of the next few days, Benjamin repeatedly took the watch apart and then put it back together. After borrowing a book on geometry and another on Isaac Newton’s Principia (laws of motion) he made plans to build a larger version of the watch, mimicking a picture he had seen of a clock. After two years of designing the clock and carving each piece by hand, including the gears, Banneker had successfully created the first clock ever built in the United States. For the next thirty years, the clock kept perfect time.

In 1776, the Third Continental Congress met and submitted the Declaration of Independence from England. Soon thereafter, the Revolutionary War broke out and Banneker set out to grow crops of wheat in order to help feed American troops. His knowledge of soil gained from his grandfather allowed him to raise crops in areas which had previously stood barren for years.

When a family friend died and left him a book on astronomy, a telescope and other scientific inventions, Banneker became fascinated with the stars and the skies. His friends Joseph and Joseph Ellicott loaned him books on astronomy as well as other tools and he taught himself astronomy and mathematics. He soon was able to predict events such as solar eclipses and sunrises and sunsets. In 1792, he developed his first almanac, predicting weather and seasonal changes and also included tips on planting crops and medical remedies. Banneker sent a copy of his book to Thomas Jefferson, at that time the Secretary of State and in a twelve page later expressed to Jefferson that Blacks in the United States possessed equal intellectual capacity and mental capabilities as those Whites who were described in the Declaration of Independence. As such, he stated, Blacks should also be afforded the same rights and opportunities afforded to whites. This began a long correspondence between the two men that would extend over several years.

Around the same time, President Washington decided to move the Nation’s Capitol from Philadelphia to an area on the border of Maryland and Virginia and Major Andrew Ellicott asked Banneker to assist in surveying the “Federal Territory”. Major Pierre L’Enfant from France was commissioned to develop the plans for for the new city and at Jefferson’s request, Banneker was included as one of the men appointed to assist him. Banneker consulted frequently with L’Enfant and studied his draft and plans for the Capitol City carefully. L’Enfant was subject to great criticism and hostility because he was a foreigner and abruptly resigned from the project and moved back to France.

As the remaining members of the team gathered, they began debating as to how they should start from scratch. Banneker surprised them when he asserted that he could reproduce the plans from memory and in two days did exactly as he had promised. The plans he drew were the basis for the layout of streets, buildings and monuments that exist to this day in Washington D.C.

Benjamin Banneker died quietly on October 25, 1806, lying in a field looking at the stars through his telescope. Nations around the world mourned his passing, viewing him as a genius and the United States’ first great Black Inventor. In 1980, the U.S. Postal Service issued a postage stamp in his honor.

Dorothy Porter Wesley 23 October 1994, William Jefferson Clinton presented her with the Charles Frankel Award from the National Endowment for the Humanities   Dorothy Porter Wesley (1905-1995), a scholar-librarian and bibliographer was born in Warrenton, Virginia in 1905, to her father, Hayes Joseph Burnett, a physician, and her mother, Bertha Ball Burnett, a tennis champion.  After receiving her A.B., from Howard University in 1928, she became the first […]