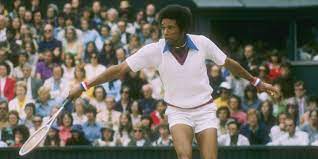 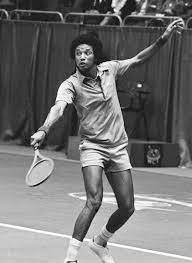 Arthur Robert Ashe Jr. (10 July 1943 –6  February 1993) was an American professional tennis player who won three Grand Slam singles titles. He was the first black player selected to the United States Davis Cup team and the only black man ever to win the singles title at Wimbledon, the US Open, and the Australian Open. He retired in 1980. He was ranked world No. 1 by Harry Hopman in 1968 and by Lance Tingay of The Daily Telegraph and World Tennis Magazine in 1975.  In the ATP computer rankings, he peaked at No. 2 in May 1976.

Ashe is believed to have contracted HIV from a blood transfusion he received during heart bypass surgery in 1983. He publicly announced his illness in April 1992 and began working to educate others about HIV and AIDS. He founded the Arthur Ashe Foundation for the Defeat of AIDS and the Arthur Ashe Institute for Urban Health before his death from AIDS-related pneumonia at the age of 49 on 6 February 1993. On 20 June 1993, Ashe was posthumously awarded the Presidential Medal of Freedom by the United States President Bill Clinton.

Arthur Ashe was born in Richmond, Virginia, to Arthur Ashe Sr. (d. 1989) and Mattie Cordell Cunningham Ashe on 10 July 1943. He had a brother, Johnnie, who was five years younger than he. Both brothers were born into a family that claimed direct descent from Amar, a West African woman who was enslaved and brought to America in 1735 aboard a ship called The Doddington.[Ashe family members were owned by North Carolina Governor Samuel Ashe.

In March 1950, Ashe’s mother Mattie died from complications related to a toxemic pregnancy (now known as pre-eclampsia) at the age of 27.  Ashe and his brother were raised by their father who worked as a handyman and salaried caretaker/Special Policeman for Richmond’s recreation department.

Ashe Sr. was a caring father and strict disciplinarian who encouraged Arthur to excel both in school and in sports, but forbade him to play American football, a popular game for many black children, due to his son’s slight build, something that meant Arthur’s childhood nicknames were “Skinny” and “Bones”. The Ashes lived in the caretaker’s cottage in the grounds of 18-acre Brookfield park, Richmond’s largest blacks-only public playground, which had basketball courts, four tennis courts, a pool and three baseball diamonds. Ashe started playing tennis at seven years of age and began practicing on the courts where his natural talent was spotted by Virginia Union University student and part-time Brookfield tennis instructor, Ron Charity, who as the best black tennis player in Richmond at the time began to teach Ashe the basic strokes and encouraged him to enter local tournaments.

Ashe attended Maggie L. Walker High School where he continued to practice tennis. Ron Charity brought him to the attention of Robert Walter Johnson, a physician, and the coach of Althea Gibson, who founded and funded the Junior Development Program of the American Tennis Association (ATA). Ashe was coached and mentored by Johnson at his tennis summer-camp home in Lynchburg, Virginia, from 1953 when Ashe was aged 10, until 1960. Johnson helped fine-tune Ashe’s game and taught him the importance of racial socialization through sportsmanship, etiquette and the composure that would later become an Ashe hallmark. He was told to return every ball that landed within two inches of a line and never to argue with an umpire’s decision. In 1958, Ashe became the first African American to play in the Maryland boys’ championships. It was also his first integrated tennis competition.

In 1960, Ashe was precluded from competing against Caucasian youths in segregated Richmond during the school year and unable to use the city’s indoor courts that were closed to black players. He accepted an offer from Richard Hudlin, a 62-year-old St. Louis teacher, tennis coach and friend of Dr. Johnson, to move to St. Louis and spend his senior year attending Sumner High School, where he could compete more freely. Ashe lived with Hudlin and his family for the year, during which time Hudlin coached and encouraged him to develop the serve-and-volley game that Ashe’s now stronger physique allowed. Ashe was able to practice at the National Guard Armory indoor courts and in 1961, after lobbying by Dr. Johnson, was granted permission to compete in the previously segregated U.S. Interscholastic tournament and won it for the school.

In December 1960 and again in 1963, Ashe was featured in Sports Illustrated, appearing in their Faces in the Crowd segment.  He became the first African American to win the National Junior Indoor tennis title and was awarded a tennis scholarship to the University of California, Los Angeles (UCLA) in 1963. During his time at UCLA, he was coached by J. D. Morgan and practiced regularly with his sporting idol, Pancho Gonzales, who lived nearby and helped hone his game. Ashe was also a member of the ROTC, which required him to enter active military service after graduation in exchange for money for tuition. He was active in other things, joining the Upsilon chapter of the Kappa Alpha Psi fraternity on campus. After graduating with a bachelor’s degree in Business Administration,

Ashe joined the United States Army on 4 August 1966. Ashe completed his basic training in Washington and was later commissioned as a second lieutenant in the Adjutant General Corps. He was assigned to the United States Military Academy at West Point where he worked as a data processor. During his time at West Point, Ashe headed the academy’s tennis program. He was temporarily promoted to 1st Lieutenant on 23 February 1968, and was discharged from the Army on 22 February 1969, as a 2nd Lieutenant. He was awarded the National Defense Service Medal for his service. He served a total of 2 years in the United States Army.

Cause of Death: AIDS-related pneumonia 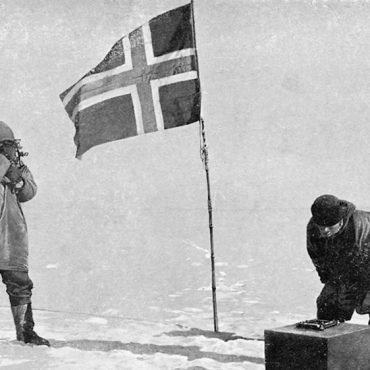 Roald Amundsen becomes first explorer to reach the South Pole   On 14 December 1911, Norwegian Roald Amundsen becomes the first explorer to reach the South Pole, beating his British rival, Robert Falcon Scott.   Amundsen, born in Borge, near Oslo, in 1872, was one of the great figures in polar exploration. In 1897, he was first mate on a Belgian expedition that was the first ever to winter in […]